Calcio Storico is not for the faint-hearted

Call it Calcio Storico, Calcio in Costume or Calcio Fiorentino

If you will be at La Scuola di Furio during the last ten days of June, I advise you to check the date carefully.

If you like what I am about to tell you, you can contact me and I will try to get the tickets for you.

If you are not interested in this game dating back to two thousand years ago (feel free to do so!), my advice is to absolutely avoid Florence in those days or to plan visits to other parts of the city, avoiding the Piazza Santa Croce area.

What is Calcio Storico Fiorentino?

To decide the combinations of the teams playing the 2 opening games there are drawing lots on Easter day, in Piazza San Giovanni. Before the Mass the bishop takes out four marble eggs, each of a team color and blesses the players. After the semifinals, the final on St. John the Baptist's day, June 24th.

The aim of the game is to "hunt", to score as many points as possible during the game, which lasts 50 minutes. When a team "goes on a hunt" the teams change their playing field. If you cross the net it is a "half hunt", a half point that goes in favor of the opponent. The ball players (calcianti) must be men born or resident in Florence for at least 10 years, they do not win cash prizes and are not paid. Since 2016, the regulation expressly prohibits hits below the belt and it establishes that footballers must not have serious criminal convictions or being more than 40 years old. The game begins when the pallaio (the one with the ball!), who is dressed in the colors of all the teams to show his fairness, throws the first ball and then gets to safety as soon as possible because the game can get really physical! To step forward and score a hunt, footballers don't hesitate to use force to block opponents. Fists with bare hands, tackles, it looks like a fight in a prison yard in an old movie but there is a logic!

The origins of calcio storico

The origins of this event date back to the foundation of Florence. Florentia was born as a Roman camp and some military veterans come to live here. These men had lived as soldiers all their lives and kept fit with this entertainment, a cross between a game and a training that was called Harpastum. Harpastum is Latin for "tear away". The game consisted of snatching something that the opponent held in his arms. Even if over the years this tradition of the Harpastum had been somewhat lost (in the course of hundreds of years many things happen: plagues, population declines, wars, reigns of sovereigns who do not like these events ...), this challenge was still in the heart of the Florentines. The game returned in all its glory in the second half of 1300 and we know certainly that in January 1491 it was played on the frozen river Arno (previously it was played during the Carnival period). The most famous match is that of February 17, 1530, the so-called siege match.

I quickly tell you that Florence was under siege by the troops of Charles V, who had settled in San Miniato al Monte. They were there for a very specific reason, from San Miniato they had a great view of the city. From there they could easily see if anyone approached the walls and also what was happening inside the city, for example in very large squares such as Piazza Santa Croce. Sieges are sometimes won by forcing the besieged to surrender, perhaps tempting them with delicacies. Or you can also reverse the sides and make fun of the besieger, making him believe that food abounds inside the walls. For this reason the Florentines scoffed Charles V throwing a roasted half ox down the walls. The episode of February 17, 1530 is slightly different, it is very Florentine. The Florentines are known for their irreverent character, they might even be blowhards and this episode paints this characteristic well.

The Florentines "in contempt" to the Imperial troops decided to play a historical football match in the most visible point of the troops, Piazza Santa Croce, to mock them and show that they really didn't care about the siege, that life in the city continued blissfully and there was also the possibility of having fun and consuming energy by practicing this sport. To make sure the troops didn't miss the show, musicians played on the roof of Santa Croce to get their attention. In response, the imperial troops fired a cannon, which hit nothing or anyone, so they were even mocked for it! For the record, the Greens of San Giovanni and the Whites of Santo Spirito played, even if we don't know who won!

How are the footballers of historic Florentine football dressed?

Please note: even if as soon as they enter the field, many footballers get rid of the upper part of the costume, the costumes are very important. The costumes have "that" Renaissance style precisely to recall the historic match of February 17, 1530. Because of the heat and not wanting to offer footholds to opponents, footballers often end up playing shirtless.

Current events: historic football in the twentieth century and today

Under the Mussolini regimen, on the initiative of the Florentine fascist leader Alessandro Pavolini, historical football was resumed and then maintained even after the war (it was even played in 1941!). From then until 1967 it was played in Piazza della Signoria because in the meantime a statue of Dante had been erected right in the middle of Piazza Santa Croce which made it impossible to use it as a playing field anymore. Don't believe it? Here Tiziana gives you the proof! Here is a photo (taken from the Facebook group "Vecchia Firenze Mia")! 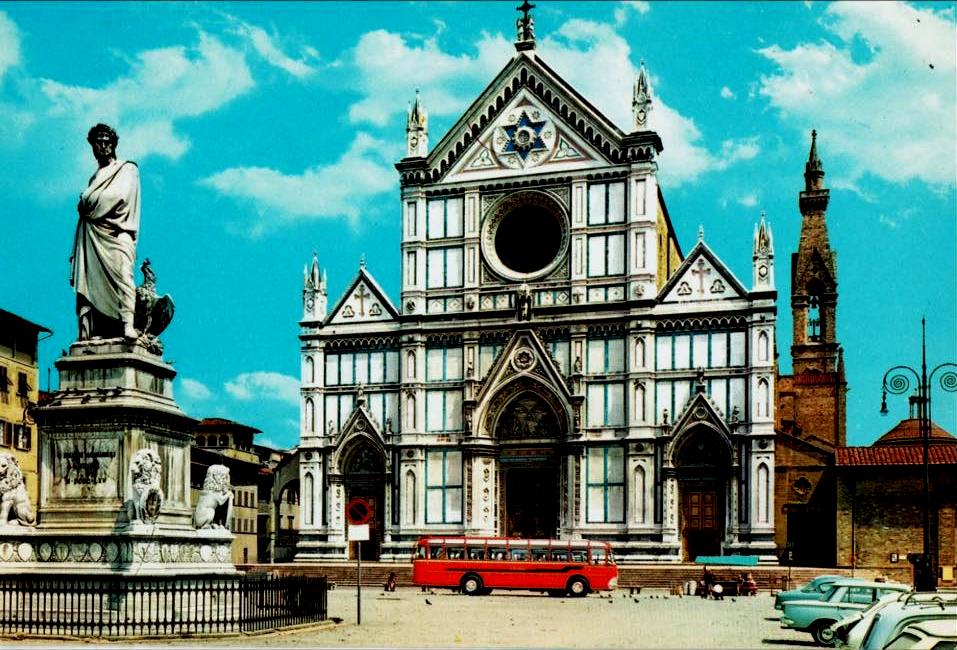 On 4 November 1966 Florence was devastated by a terrible flood. The flood damaged the base of the statue which, once restored, was no longer placed in the center of the square, but where we see it now, at the top of the staircase in the churchyard of the Basilica of Santa Croce. So Piazza Santa Croce was once again free to be the place where to play historical football.

What is the prize up for grabs?

A curiosity that few people know! All these big men who fight so fiercely... What do they win? Well, a Chianina pure breed cow goes to the winning team!

To get an idea from your home...

Those of you who have Netflix can get an idea of ​​Historical Football right from the sofa at home. From 2020 on the platform there is the "Home Game" docuseries, on the most exciting and curious sports in different parts of the world, with a particular eye to the history and culture in which they were born. The eight episodes concern events in the USA, Congo, from India, Indonesia, Kyrgyzstan, the Philippines, Scotland and Italy. Shot in 2019 between Prato and Florence, the series also shows the hard work, the passion (the real engine of these events) and and all the feelings behind these games. Here the anticipation in Italian. Those of you that speak a fluent Italian couldn't help but notice Riccardo's slight Florentine inflection when he says: "Not everyone can play this game!".

All of the pictures come from the official site: https://www.calciostoricofiorentino.it/